More than smart city: IoT is changing the world 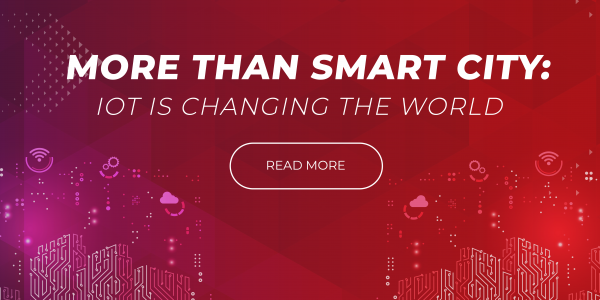 Over the past few years, IoT has become one of the most important technologies of the 21st century, and it has a lot of potentials. Now that we can connect everyday objects—kitchen appliances, cars, thermostats, baby monitors—to the internet via embedded devices, seamless communication is possible between people, processes, and things. The potential of IoT will unlock the future opportunities of every industrial area and, furthermore, changing the world. This blog will illustrate the potential of IoT and how IoT creates a smart world. With the advancement of IoT technology, nations worldwide are implementing and constructing smart cities, which can be seen in developed cities such as Korea’s Busan, Singapore, and China’s Shenzhen. The government has used IoT to construct smart cities, according to the study IoT-Enabled Smart Cities: Evolution and Outlook of MDPI 2021, specifically as follows:

As IoT becomes more widespread in the marketplace, the future of IoT has the potential to be limitless (quote) As a result, many fields benefit from IoT, such as manufacturing, automotive, retails, education, healthcare, transportation, logistics, etc. To be more specific, The automotive industry stands to realize significant advantages from the use of IoT applications. Sensors can identify approaching equipment failure in cars currently on the road and inform the driver with facts and advice, in addition to the benefits of using IoT on manufacturing lines. Automotive manufacturers and suppliers may learn more about how to keep automobiles operating, and car owners informed thanks to aggregated data acquired by IoT-based applications. Furthermore, in the Healthcare field, there are some IoT applications such as Glucose monitoring and Heart-rate monitoring, which allow users to better manage their health and respond to their requirements. In the future, the potential of IoT is predicted to fix the outdated data access, focus on 5G and the super data-center trend and solve the risk of security.

In conclusion, the IoT-enabled new world is quickly changing. Now is the time to get ready. IoT promises to decrease waste, expense, and annoyance while boosting efficiency, thanks to these fantastic prospects. But maybe the most interesting aspect is that IoT allows us to live in a cleaner environment while also allowing us to work more effectively and with greater quality. However, additional study and creative thinking are required to overcome the security and power consumption issues brought by unrivaled IoT connections and, at the same time, dubious IoT security.